AdvantEDGE is a controller software that facilitates deployment of edge applications in a simulated network environment.

It is composed of a collection of micro-services that interact together to allow deployment and testing of edge scenarios.

AdvantEDGE micro-services are packaged in Docker containers which are designed to operate in a Kubernetes environment.

Containers belong to one of 4 groups 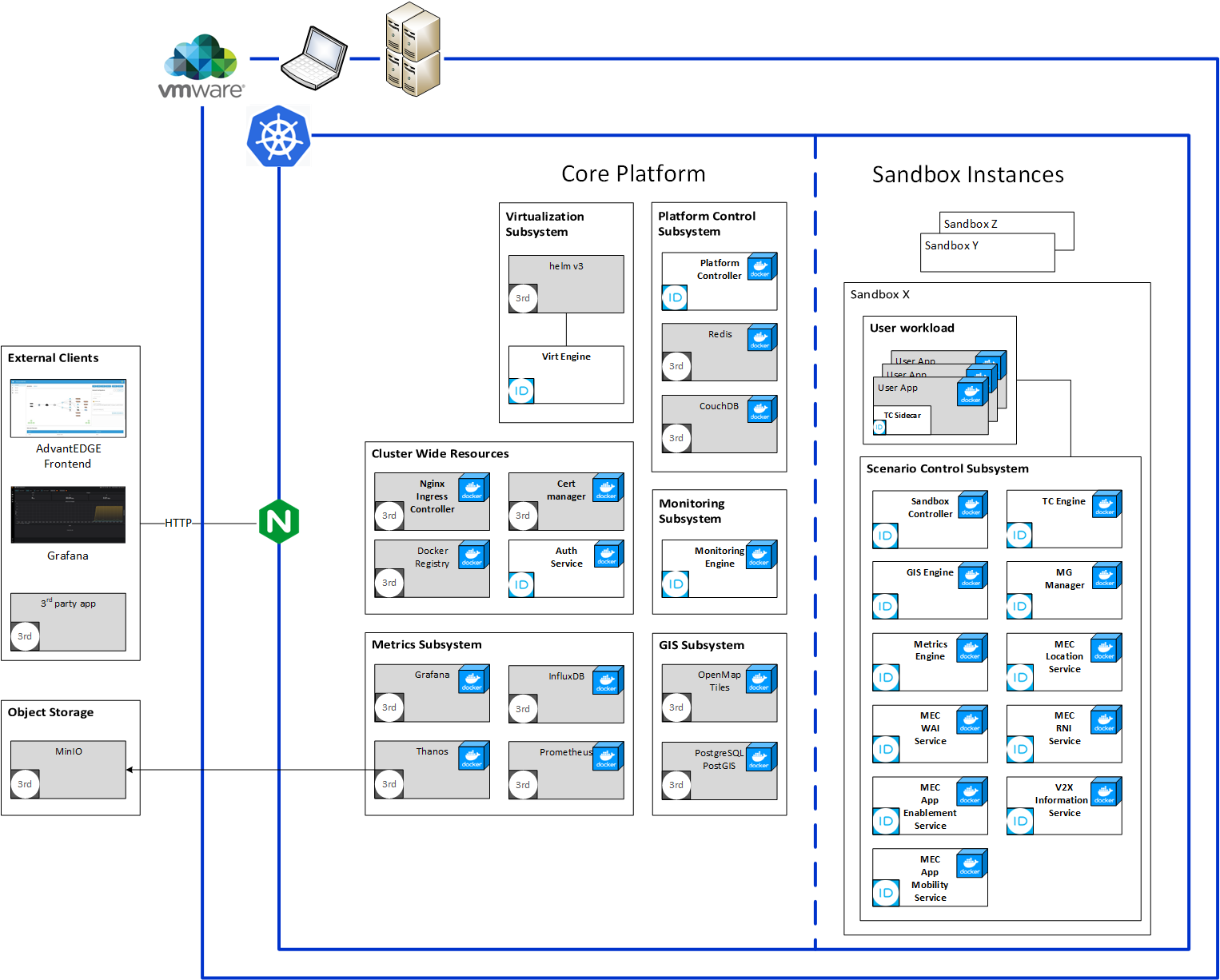 AdvantEDGE uses the following model to define a scenario.

Accordingly, user terminals can be configured to support a subset or all existing wireless connectivity types. The wireless technologies of a terminal can also be prioritized in case a terminal is in range of several PoAs; in that case a UE would connect via the highest priority wireless technology which is physically the closest to the terminal.

User terminals also support having no connectivity; this can happen if the initial state has been configured as disconnected, if a terminal is out of range of all supported PoAs (when using the GIS automation) or when a user sends a Mobility event to DISCONNECTED destination.

With regards to the AdvantEDGE model, network characteristics can be applied on a Scenario (Inter-Domains, including Distant cloud elements which are considered as part of another domain), Domains (Inter-Zones), Zones (Intra-Zones), POAs (Terminal-links), Physical Locations (Distant clouds, Edge nodes, Fog nodes, UEs) and Processes (Applications)

At deployment time, containers are started in a Kubernetes pod; AdvantEDGE inserts a companion container (a sidecar) in each deployed pod. The sidecar has the mandate to apply network characteristics from the simulation model. The TC-engine is the micro-service responsible for implementing the real-time simulation model; it constantly maintains & updates network characteristics using multiple inputs such as the scenario values, scenario updates (mobility & net.char events), current bandwidth used by every pod, etc. providing each sidecar of the scenario with values to apply. The “tc” acronym comes from Traffic Control and relates to the underlying tc-netem technology used to realize network characteristics in each sidecar.

About network emulation, the emulation model is path emulation and is only concerned with emulating end-to-end network characteristics between processes, using a network hierarchy defined by the scenario. The resulting network characteristics applied between two communicating processes are then the result of calculations based on the scenario topology (see table below for the details). Internally, each possible path between processes is sub-divided in segments onto which network characteristics are applied; finally, using these segments, an end-to-end path calculation is done. For example, in its simplest form, end-to-end segment latencies are added to compute the path latency; at a higher complexity level, available bandwidth requires a calculation that is function of the segments configuration and real-time consumption by other processes sharing the path segments.

A path is a collection of segments with each segments having its own network characteristics.

Two processes exchanging data in one direction is called a flow. A flow contains a path. A path is unidirectional.

The following provides a general overview of a path-segments evaluation between processes executing in different physical locations for a given scenario. 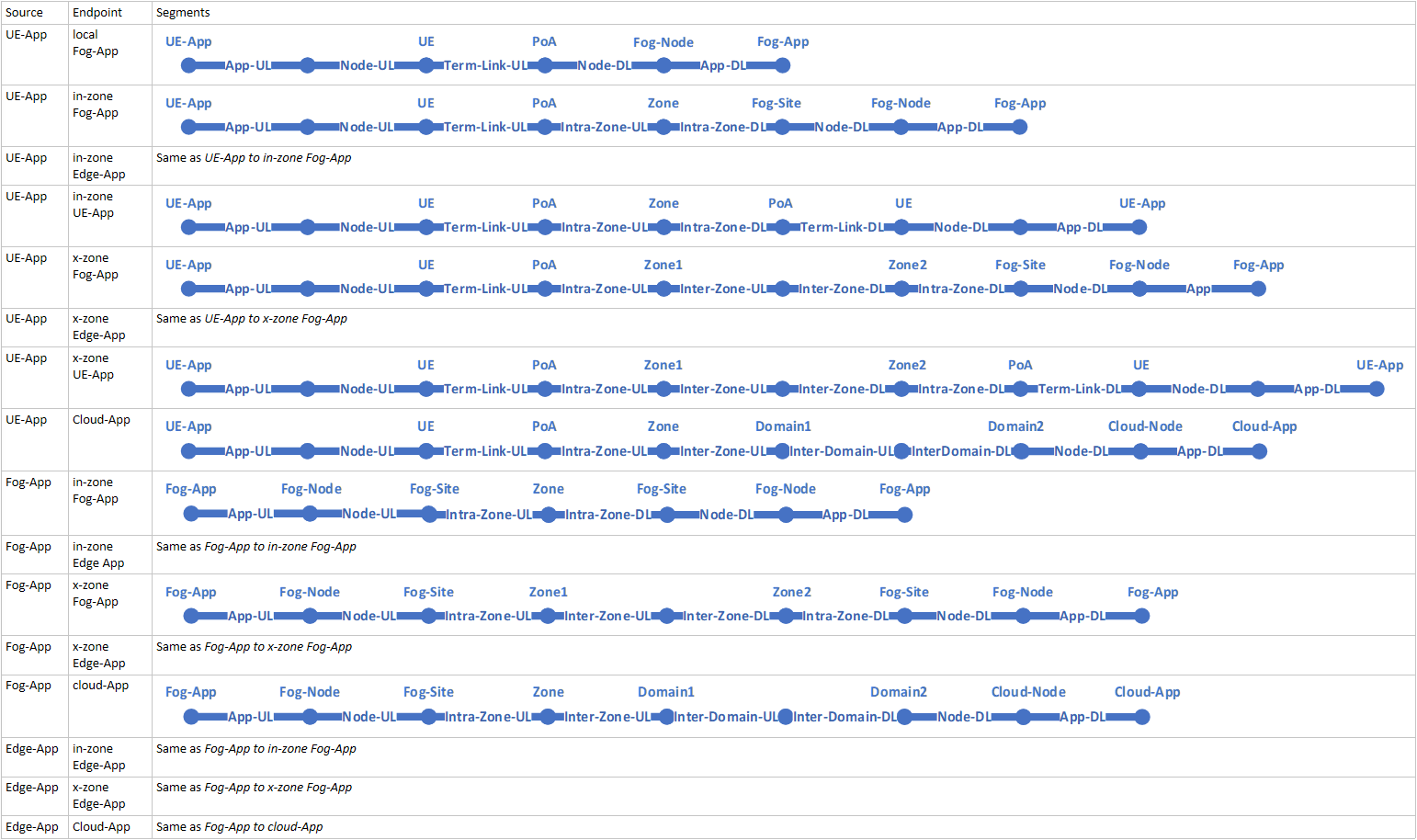 These can be specified at scenario configuration time and cannot be dynamically updated once a scenario is deployed. The compute characteristics are handled by the K8s platform.

CPU limitation will reserve the minimum value and automatically cap CPU usage to the to the maximum value specified. CPU units can be specified as a fraction ( ex: 1.3, 0.5, 0.25 etc.); 1 CPU corresponds to 1 Core, 1 vCPU or 1 Hyperthread depending on the host platform you are running on.

Memory limitation will reserve the minimum value and automatically cap memory usage to the to the maximum value specified. Memory units are in MegaBytes.

A workload will not execute if the system does not have enough resources to satisfy requirements; the following rules apply:

Edge applications architecture may be influenced by different deployment, behavioral and grouping models. Below, we provide architectural considerations for developing your edge applciations.

Below are a few deployment model examples:

The behavioral model of an edge application can vary greatly depending on its function, deployment model and overall design.

Below are some considerations that influence the behavioral model of an edge application:

To help application developers & researchers with edge application design, AdvantEDGE allows to experiment with different models in an agile manner before any deployment happens on the real infrastructure.

From a UE point of view, accessing a single/multi-edge application at run-time makes no difference; the fact that the application has multiple instances is not known to the UE.

This section provides a bird’s eye view of the AdvantEDGE frontend architecture. This high-level overview should give the reader enough insight into the design choices to get started exploring and augmenting it.

The frontend is based on React and Redux javascript technologies

The frontend is composed of 5 main tabs or pages.

A key portion of the React application state structure is shown below:

AdvantEDGE frontend uses a Redux reducer; it takes as its arguments an action and the current state of the application and computes a new state for the application. In turn, the main functionality of React can be seen as a function that takes the state and through a render function outputs corresponding html markup.

In AdvantEDGE frontend, the root reducer is composed from more specialized reducers that individually compute state transistions for the following branches of the state tree: ui, cfg, exec and settings. In turn, cfg and exec are each created by combining lower-level reducers, one for each sub-branch of the state.

The state of the application is updated through Redux actions when user-initiated events occur or following responses from HTTP requests to the AdvantEDGE server.

The following diagram illustrates this general pattern as used in the AdvantEDGE frontend. 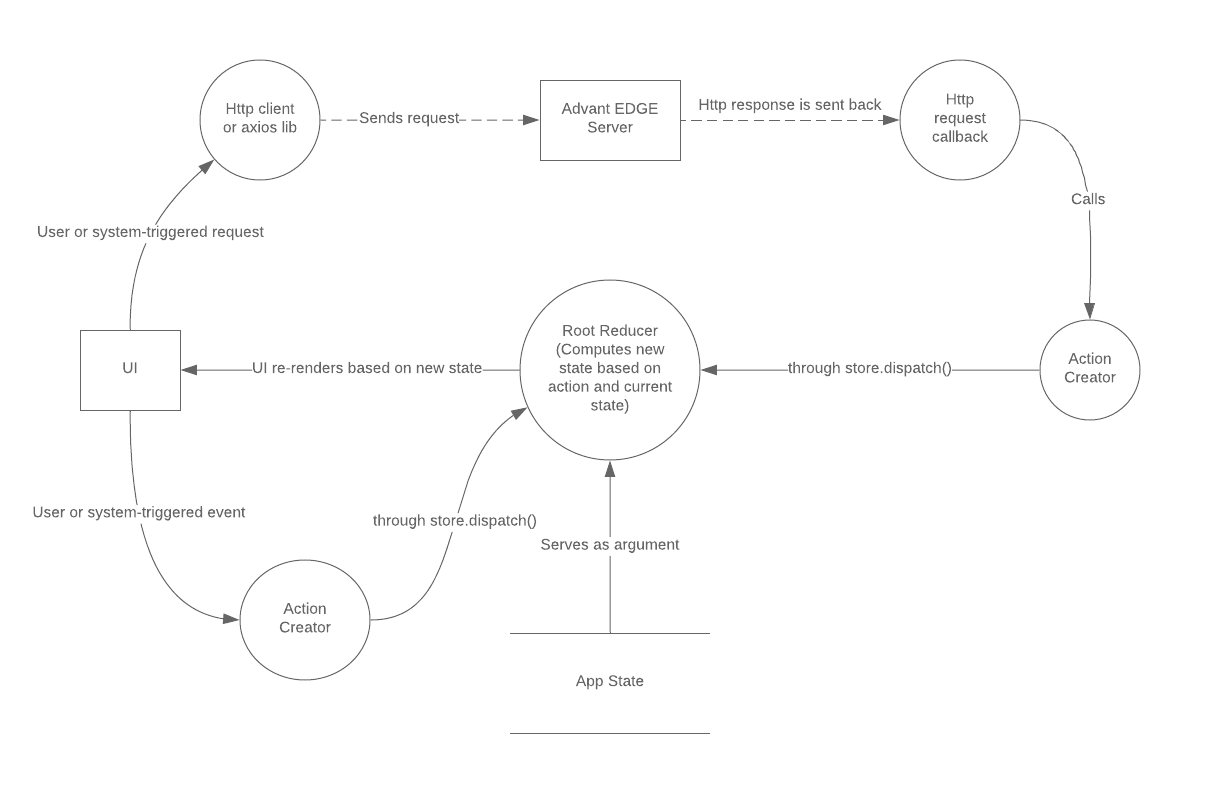 The following table describes actions of the AdvantEDGE application.

Learn about the various Platform features that enable a rich experimentation environment: